Henry Ford Trade School Alumni Association, Alumni News, January 1962 — This month we feature alumnus Frank Kern, Jr. as our man of the month. Frank is another one of our members who achieve success via the road of hard knocks. Presently he is owner of several plants; but his experience in starting out in the manufac­turing business can be compared to that of his idol the late Henry Ford. However, the many obstacles of being in business were overcome by sheer deter­mi­nation, long hours and barrels of energy and ambition. 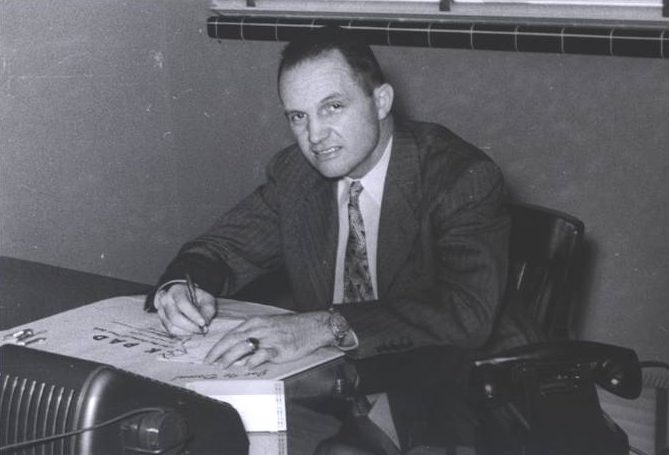 He was born on November 20, 1914 in the little coal mining town of Nokomis, Illinois. Economic condi­tions were tough during his early childhood down there, and in 1928 he came to Detroit to live with his Aunt and Uncle. They had two sons and one of them was already enrolled in the Henry Ford Trade School. Kern entered the Trade School at the age of 14 in 1929 and graduated in 1932. He was in the “T” Section and because jobs were difficult to find during these depression years, he stayed on until 1935. During this time, he completed college preparatory academic require­ments at night school and being ambitious to improve himself and get ahead, entered the University of Michigan in 1935. He received his Bachelor’s degree in engineering in 1939.

Following his gradu­ation he worked for a time in Aurora, Illinois, then succumbed to the lure of the West Coast and the glamorous pre-war aircraft industry. After less than one year with Vultee Aircraft in Los Angeles, he decided to return to Detroit with its much greater indus­trial potential. Kern took a job with Briggs Manufacturing Company as a tool design engineer in 1940, then after the war started and Briggs converted to aircraft sub-contracting activ­ities, he became an expert in the Aircraft Division due to his short term at Vultee. He acted as Briggs Co. repre­sen­tative at the Boeing Plant in Wichita for several months during the Spring and Summer of 1942. Later on in that year he was appointed Briggs Company repre­sen­tative at the main Boeing Plant in Seattle where he resided until after the war ended in 1945. He returned to Detroit and accepted a new assignment at Briggs.

Kern wanted to be his own boss and so started looking around for business oppor­tu­nities. He only stayed with Briggs until February of 1946 when he and a partner purchased the forerunner of the present Maxitrol Company known in those days at Metal Parts Machine Company. This little company situated on the East Side of Detroit had two products one of which was a gas appliance regulator. The other product, a little gasoline engine motor for model airplanes, was in a declining market, but the pressure regulator suddenly was in great demand because of the resur­gence of the appliance business and the avail­ability of new gas supplies in 1946.

Kern, having no precon­ceived notions of what couldn’t be done, developed a new design, the patent on which is issued in his name, and which will not expire until after 1970.

Kern acquired the previous interest of his partner and company sales grew rapidly after the new product was intro­duced. The company name was changed to Maxitrol and the firm moved to new quarters twice since 1953. Presently the Headquarters Offices are situated on Telegraph Road in Southfield with manufac­turing plants in Colon and Blissfield and a separate tool shop in Southfield on Eight Mile Road.

The company is presently expanding its activ­ities in the control field with the recent intro­duction of a sophis­ti­cated control system which is capable of modulated fuel supply in gas fired furnaces.

Kern was so busy building a business he didn’t get around to getting married until 1954, but as the saying goes, “Life begins at 40”, and since then in addition to acquiring a charming wife, he has become the father to two lively handsome children. His son and a namesake is now six years old, and the little daughter, Bonnie, is four. His family activ­ities have caused him to give up his former hobby of sailing big blow boats around the lakes. 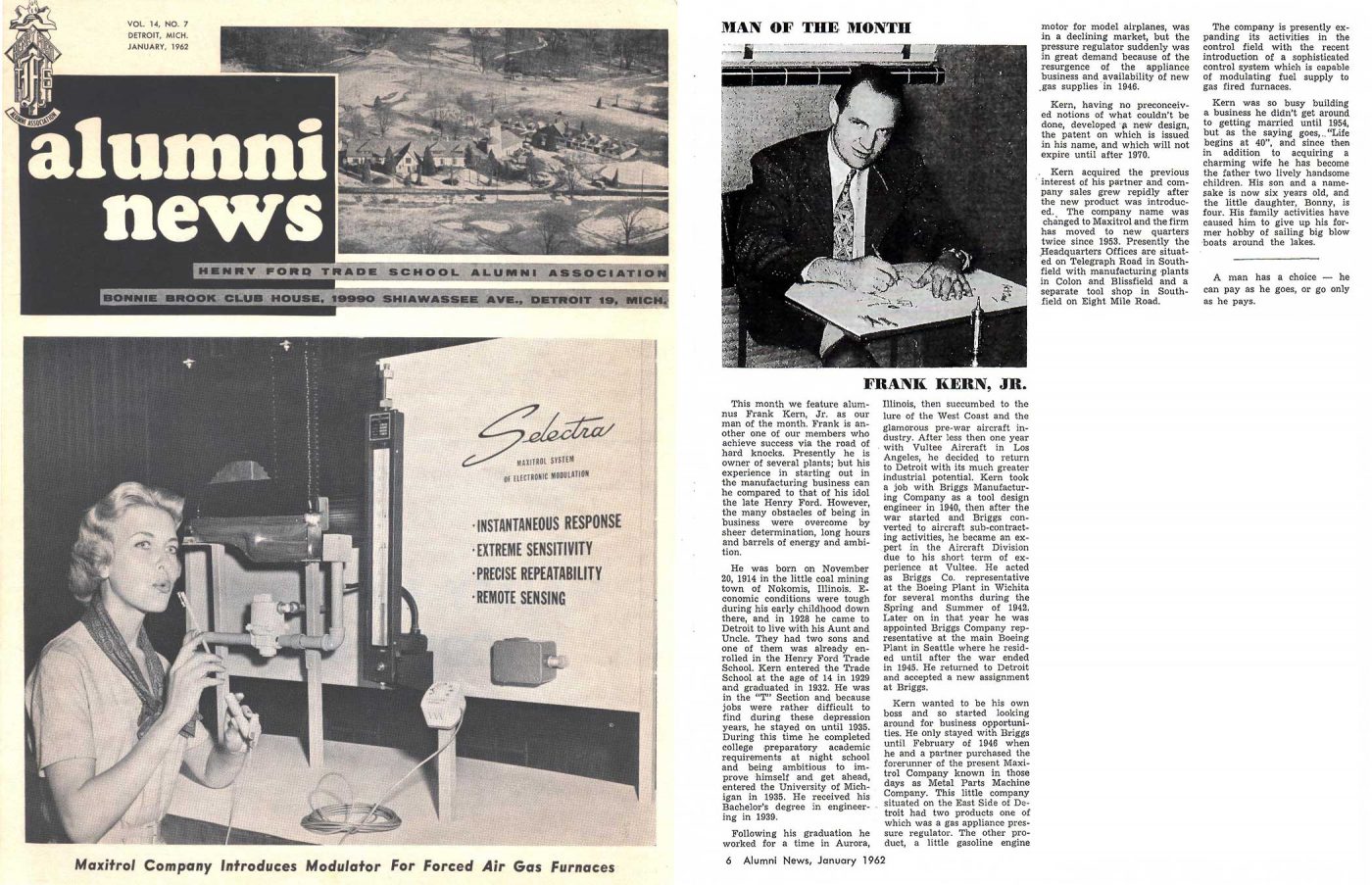