Join us throughout the year as we celebrate our 75-year anniversary. For this #TBT we go back to the Mertik Maxitrol (now Maxitrol GmbH & Co. KG, Germany) newsletter from 1997:

March 24, 1997 — the first ground-breaking ceremony on our future company premises in the indus­trial area Thale-Norde

Strictly speaking, there were six first ground-breakings, one by each of the six signa­tories of the certificate shown above. With this, the long awaited start of construction in Thale was initiated.

If every­thing proceeds as planned, a production building with approx. 4,300 m2 and an office building with approx. 1,300 m2 of floor space will be built on the 16,000 m2 area by December. With 100 parking spaces, there will then be almost twice as much parking space as is currently available here in Quedlinburg. It is also planned to include Mertik Maxitrol in the Quedlinburg-Thale bus connection with a bus stop directly in front of the company premises.

The move will take place in November for the production building and in December this year for the office building. 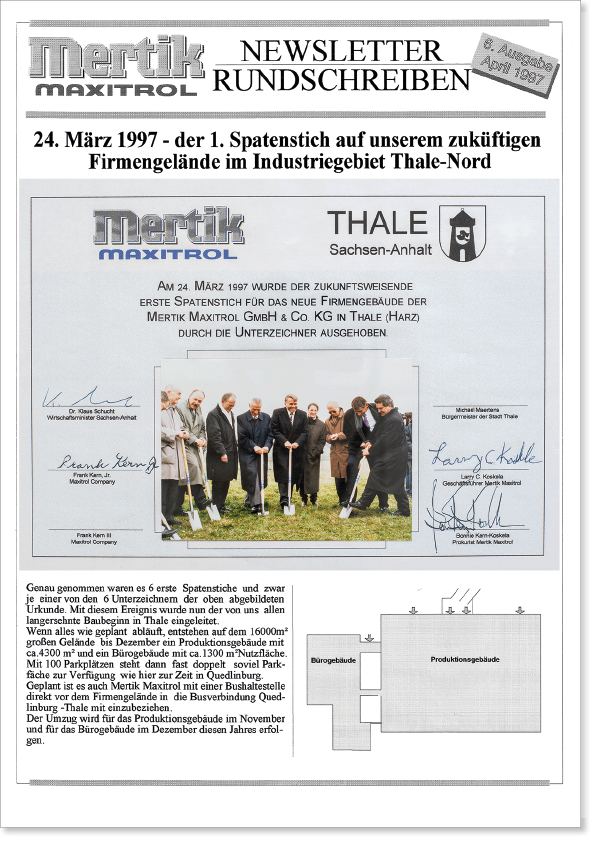 Back
We use cookies on our website to give you the most relevant experience by remembering your preferences and repeat visits. By clicking “Accept”, you consent to the use of ALL the cookies.
Cookie settingsACCEPT
Manage consent